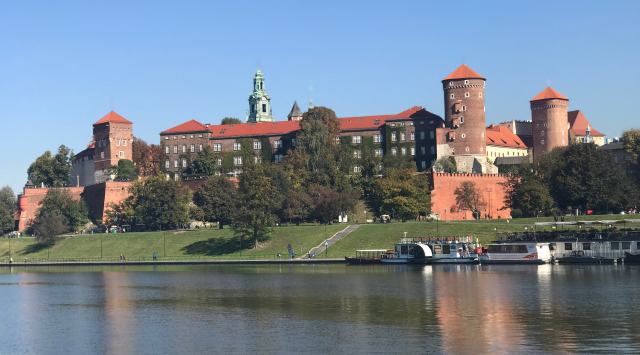 I am just back from an incredible three-night city break to Krakow, Poland. This city has so much to offer in terms of history, culture, architecture and cuisine. We stay with 3* Art & Garden Residence.

We flew out of Dublin on Tuesday 2nd October with Ryanair. Our flight was scheduled for 16:50 but we were delayed slightly because of the previous flight being late flying into Dublin. After a two hour and fifty minutes flight we finally arrived into Krakow. We passed through customs and waited for our luggage at the baggage reclaim – it was late as well. But it was grand, we just went outside to the line of airport taxis waiting and told the driver the name of the hotel and showed him the address on google maps. Krakow airport is only approx. 30 mins drive to our hotel and as it was late; we got to our rooms, dropped our bags down and went down the town to the main square to get a bite to eat. The kitchen in our hotel closed at 10:30pm. We managed to find a spot along the perimeter of the main square itself and ordered a large chicken and sweetcorn pizza with garlic sauce – it was beautiful. Too hungry to get a picture though! Our hotel was perfect. We were about a 13 min walk to the main square. The hotel itself was so clean and had a funky and contemporary design. Our rooms were up the first floor and the back of the hotel. To get our rooms you walk through the breakfast/dining lounge and passed the garden terrace area; these areas add to the peaceful setting and tranquillity. It was so peaceful at night and the hotel had a more sophisticated vibe – which I was so glad of because we were there for a relaxing and enjoyable city break for all three of us.

On our first full day we wanted to get used to the area and get the lay of the land. We wandered about the main square and surrounding tourist spots; such as Wawel Castle, popped into Saints Peter and Paul Church, mooched about the shops and took pictures of all the beautiful buildings along the way. We then wandered back to the main square for food, a rest and of course more pictures. 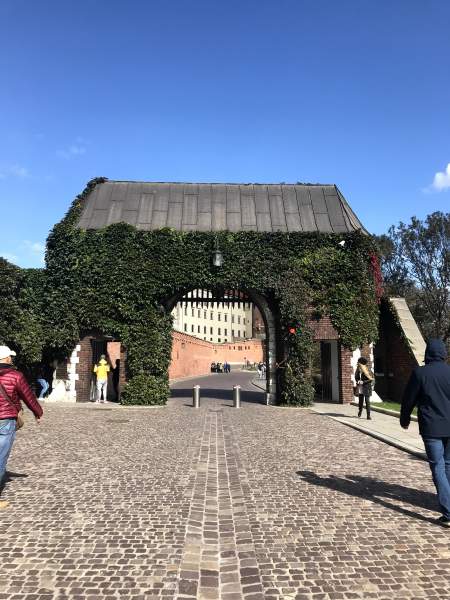 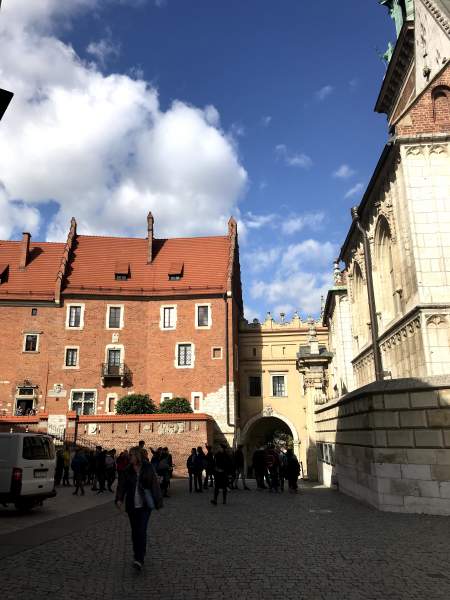 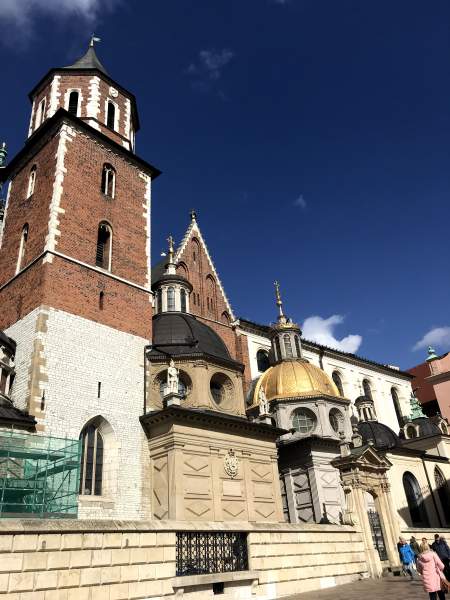 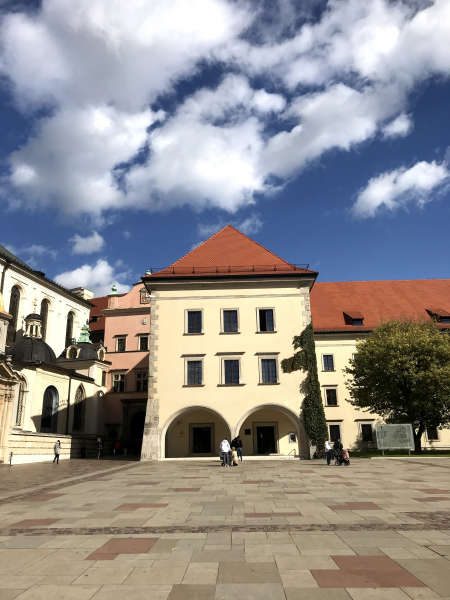 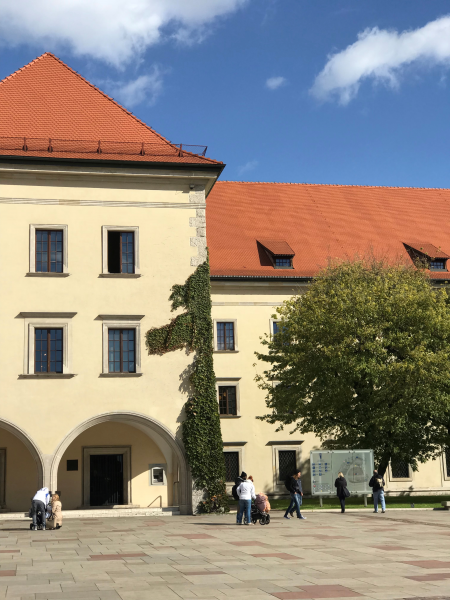 We had a late lunch in The Hard Rock Cafe. The food and staff were great and the view looking towards The Cloth Hall in the main square was amazing. 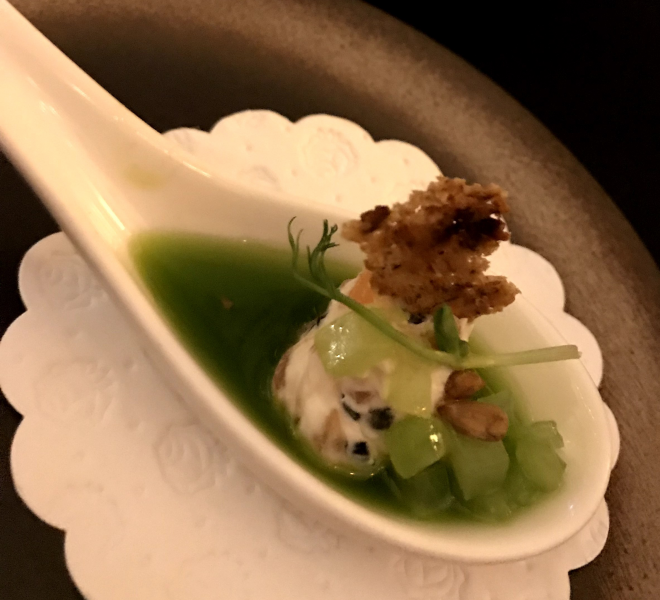 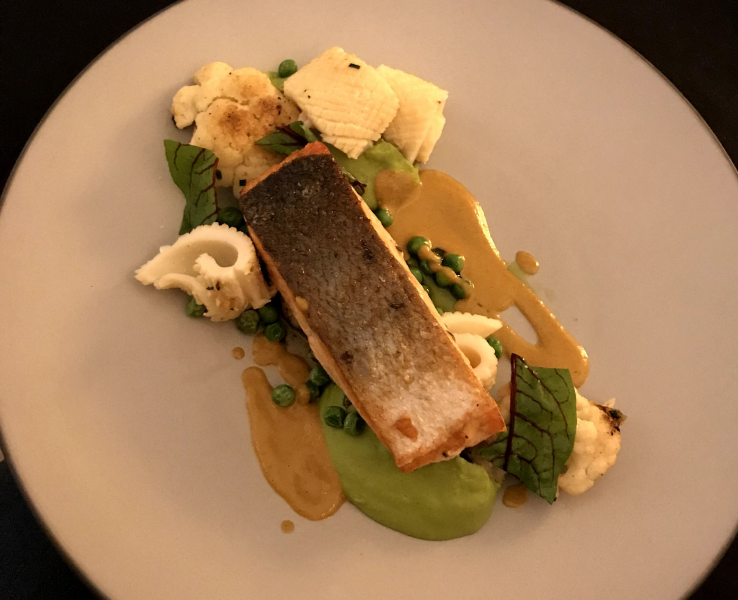 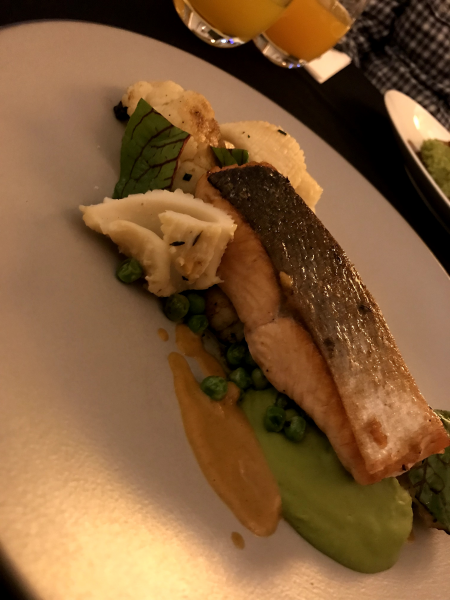 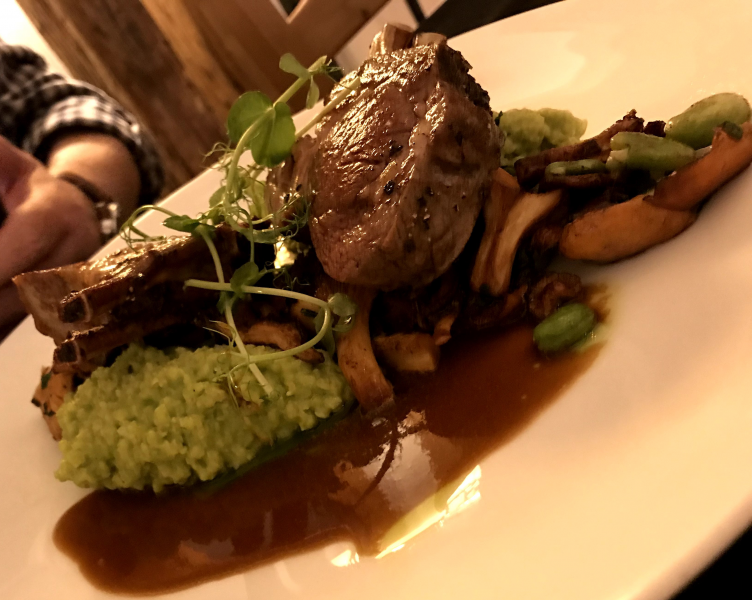 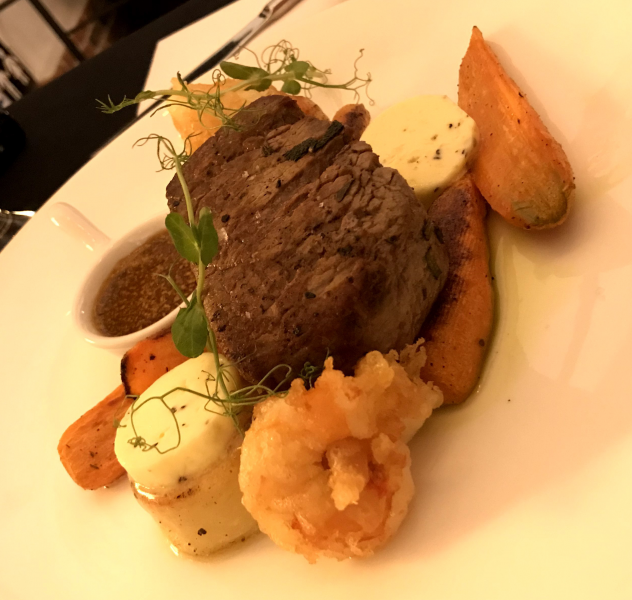 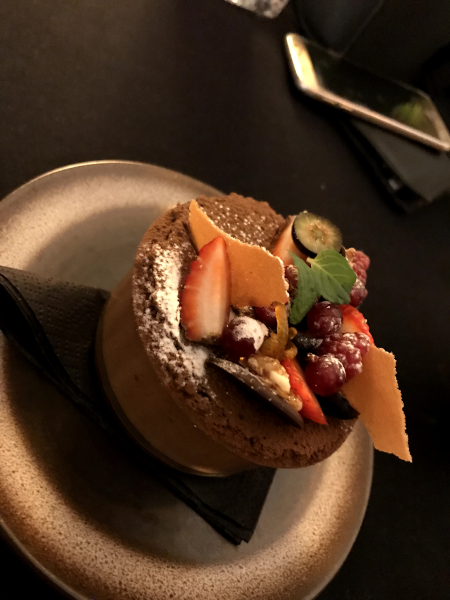 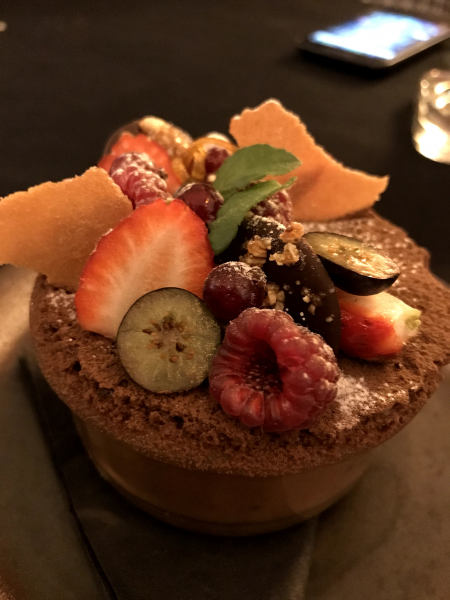 Later that evening, we headed back to the hotel to get some food and an early night. The food at the hotel was beautiful and slightly more expensive than other restaurants – but this was to be expected as it was a hotel restaurant. I had salmon and squid, Scott had beef and prawn, and Mike had lamb. We were given amuse-bouches with cottage cheese, crispy bacon and cucumber before our mains. For dessert Scott and I shared a chocolate and vanilla mouse. The hotel cleaning staff were so cute and thoughtful – they folded my pyjamas! it’s the little touches like this that made us love our hotel. Reception staff were also all very helpful – Tomask, who checked us in, gave us recommendations for other popular sights to see in Krakow; such as the National Museum where you can see Leonardo da Vinci’s ‘Lady with an Ermine’ painting. Unfortunately, we never got to go – but there’s always next time!

We had booked both Auschwitz and Saltmines for the combined day trip. We had to be at our meeting point (Radisson Blu Hotel) for 7am; this meant that we were going to miss breakfast in our hotel, but it turned out OK because they were able to put together packed lunches for us as a substitute. We had a guided tour for The Auschwitz-Birkenau Memorial and Museum; which includes the Nazi concentration camps Auschwitz I and Auschwitz II – Birkenau. Our tour guide was brilliant and we each had headsets so that we could always hear what she was telling us. All together I think this tour lasted about 4/5 hours.

Our bus brought us back to the meeting point to pick up the other people who had booked the Saltmines tour on it’s own. The Saltmines were only about a 20-25 min drive from here and we had time to get a bite to eat before this guided tour. We had headsets again for this tour and our guide was brilliant; he knew so much and made many attempts to interact with us as a group. It gets pretty warm down there too so I wouldn’t advise you take a big jacket/coat with you on this tour – a warm jumper would do the job. There are a few gift shops along the way on this tour and I got two bags of rock salt – Sol Kamienna. I couldn’t go too much overboard with buying gifts and souvenirs as our suitcase was overweight when coming over in the first place. Both of these historical attractions were incredible and outstanding. I can’t get over the extent of Auschwitz and how beautiful the Saltmines are. I don’t honestly think words could do either of these locations any justice. You just have to see it for yourself. Both of these trips include a lot of walking so by the end of this 11-hour combined day trip we were pretty tired.

The next day, Friday, was our last day. We decided to take it easy; as we were completely knackered at this stage. There is a lot of walking about when it comes to Krakow. We got a taxi from the hotel to drop us off across the river from The Wawel Castle. We then walked back to the main square to get a few more final pictures and take in the scenery. From the very beginning of this trip I always said I wanted to try some traditional Polish dumplings; Pierogi. We found a great spot at Loza Cafe looking out towards The Cloth Hall and the line-up of carriage horses outside St Mary’s Basilica and ordered drinks with two plates of Polish dumplings; one with cottage cheese, onions and potato and the other was labelled as meat – it tasted like beef. Both were delicious and so was my Pina Colada cocktail! After this we had another wee look through The Cloth Hall – they have lovely traditional items in there such as jewellery, clothing and other handmade crafts. We went to the western corner of the square where the Eros Bendato head sculpture is located and also a Starbucks – the one and only place we could find a nice cup of tea – this was the perfect spot to people watch while sipping some hot beverages. We then moved on another bit and we chose to walk down one of the wee alley ways we hadn’t been down before – just to see what we would come across. We found the beautiful St Anne Church. I absolutely love looking around churches and cathedrals because they are generally pretty simplistic looking from the outside and so grand and extravagant on the inside. 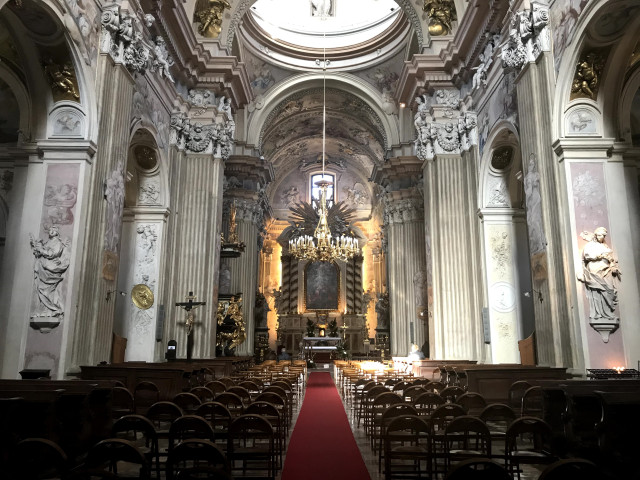 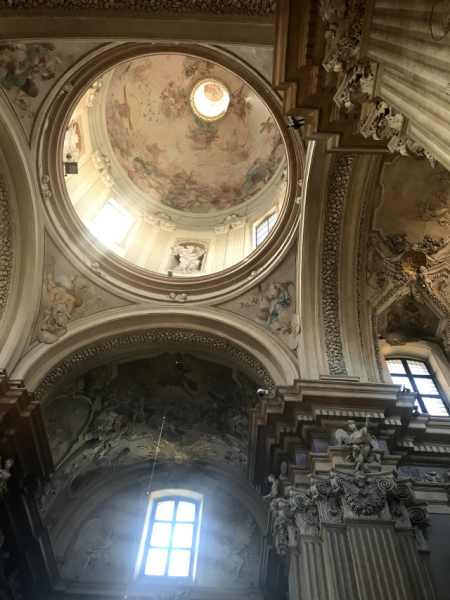 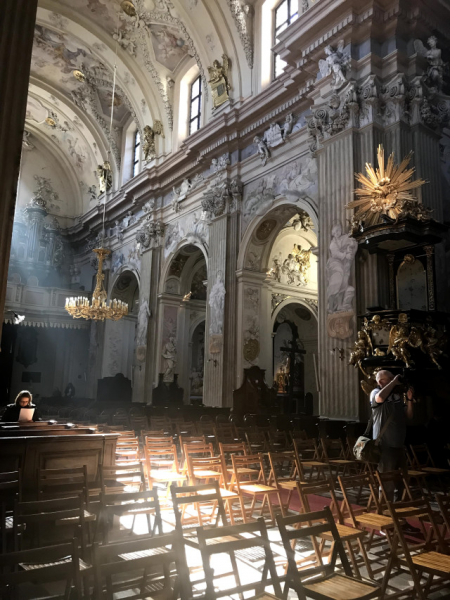 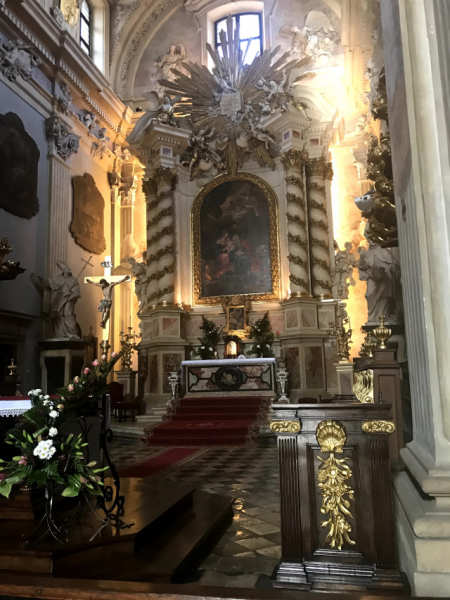 Below are some pictures I took of the Saints Peter and Paul Church – another beautiful building. After this walk about; we decided to try the Italian restaurant our friends had tried and loved the most out of all others; this restaurant was called Mamma Mia Trattoria. We knew only to have a main dish as those dumplings were quite filling, but we had to eat something now as we all agreed we didn’t want to chance food in the airport or on the plane. I had ordered the grilled tuna steak and the boys both ordered lasagnes. My tuna steak was done rare and it was wonderful! The boys really enjoyed their lasagnes too and all dishes were the perfect size for what we were looking for right then. After we filled our stomachs to the brim, we made our way back to the hotel to pick up our luggage and get a taxi from there to the airport. We got to the airport in good time and the flight home was grand. As it was a late flight back to Dublin (about a two hour drive from home) so we had already made a reservation with one of the airport hotels; we were completely knackered by the time we got off the plane so there was no way we could have made that drive home in one piece.

I would love to go back to this city; there was still so much more we wanted to see but just simply didn’t have the time – such as the Kościuszko Mound, the Barbican and the Old Jewish Quarter Kazimierz and we did really want to go to the Oskar Schindler Museum too. Krakow Top Tips:
> I had read in the Lonely Planet book on Krakow that it is customary to tip when eating out. In Poland tipping is expected for good service in restaurants – the norm is to tip around 10% of the bill. You can tip 15% if the service was exceptionally good. Tipping is not obligatory; you can tip whoever you want to show that the service was good. Our first night we only had big notes and so had no change to give a tip, which we felt awful about, so the next few days we always tried when possible to get our larger notes changed to smaller ones for this reason and also because a lot of shops and stalls don’t like to take in larger notes and will 9 times out of 10 make a big deal out of it.
> Also, when in restaurants, if your only option is to give over a larger note to pay make sure to ask for your change, if you are expecting a lot back and then you offer your tip.
> The exchange rate from sterling (GBP) to Polish złoty (PLN) is amazing! I only brought £250 sterling with me and that converted into about 1150 PLN – I managed to come back with about 200PLN. Most of our money went on food and drink – but not once did we really have to budget ourselves because the price there for everything (once you worked it out in what you would spend in sterling) was so so cheap!
> It’s a very walk-able city; major sights are dotted along the main square and so you easily dander about to take it all in. But if walking isn’t your thing; we seen these golf cart tours which cost about 150PLN and they will take you all the top tourist routes – even the ones outside of the main square to the Kazimierz and Schindlers Factory; they give you an audio guide (who is also your driver) as well.

I’d love to hear if you’ve been to Krakow before and what all you did while there, or if you are planning a visit soon and want some suggestions or advice – just give me a shout! My email is Cheryl@carefreetravel.co.uk