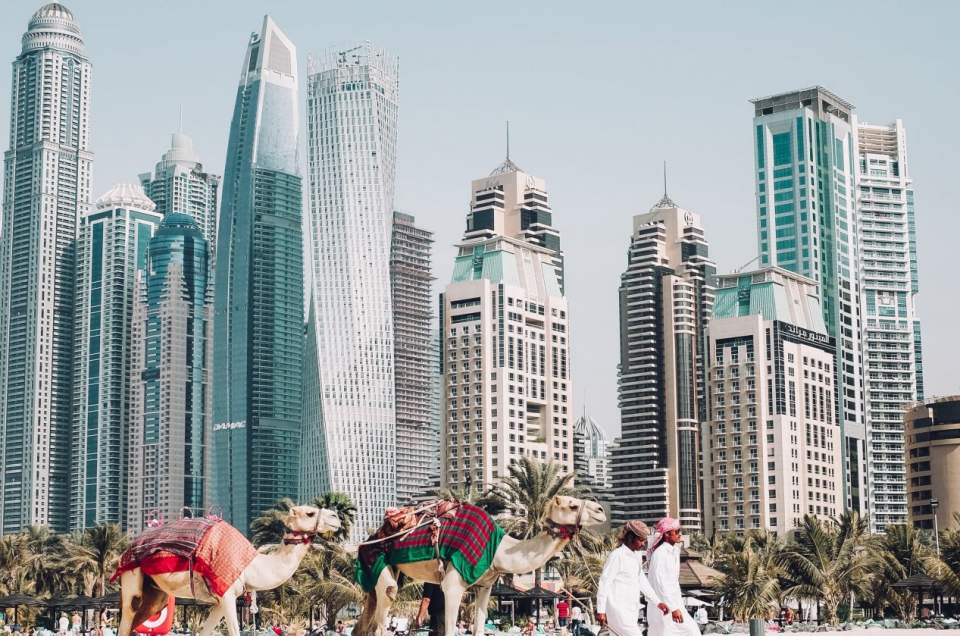 I was lucky enough to have been chosen to take part in a familiarisation trip, with other travel agents, to experience Dubai first hand.

The recline on the seat is about 160 degrees so not fully lie flat bed.  Once you are settled in they come around and offer you a ‘mattress’ for your seat.  Dinner service is 3 course and you have a choice of 3 items for each course from a menu.  This is served with a table cloth on your pull out table, proper delph plates and glasses and cutlery.  There is an endless supply of wine and champagne should you wish to avail of it.

You do get a wash bag on the flights from Dublin which is packed with Bulgari branded creams and perfumes etc.

There is an entertainment system for you also; there was an iPad attached to the side of the seat and a big screen in front of me.

At Dubai Airport – the walk from the arrival gates to immigration is very long so make sure to request assistance for if you are someone who may normally need it.

This was our first hotel, rooms are divided over two tower blocks A & B, the hotel has 1608 rooms but each floor only has 14 rooms so it doesn’t feel so massive.  They have the 2nd fastest lifts in Dubai only second to the Burj Khalifa.  We were treated to buffet lunch in the hotel which was amazing and the largest buffet I have ever seen which was also used for breakfast the following morning.  Breakfast if you are not on a package here costs approx. £25pp but for the selection on offer I would say is well worth it.  The rooms here were AMAZING, very large and suite type in style.  The bathroom had a very large stand alone bath and huge walk in shower.

We were picked up from hotel and driven 40 minutes from the city out to the desert.  Here we watched a falcon show, drove up and down sand dunes and had a bbq in the desert at a specially designed camp which had proper toilet facilities.  There was a belly dancing show and at one stage they turned out all the lights so you could star gaze.  This is definitely an experience worth going for.

SHERATON AT THE MALL OF THE EMIRATES

The location of this hotel is the key feature.  It is attached to the Mall of the Emirates so you can walk right from the hotel into the shopping centre and from here you can hop on the metro around the city.

Rooms here were modern but the bathroom had a large glass wall into the bedroom – there was curtain blinds you could pull down to block the view but this hotel may not be suitable for everyone.  The swimming pool here is on the roof top.  There is a great view of the Burj Al Arab and the Burj Kalifa from this hotel so great for viewing fireworks on New Years Eve.

We were treated to dinner in BESH which is the hotels Turkish restaurant and all I can say it was absolutely amazing!!  The food was sharing platter style and was very tasty.  Breakfast was also served here in the morning and was a mixture of western, Arabic, Indian etc.

This hotel is out at the Dubai Parks and Resorts which is about 30 minutes out of Dubai.  The hotel is Polynesian in theme and the rooms are set out over several blocks.  The position of the hotel is ideal for anyone wanting to access the parks – Bollywood, Motiongate, Legoland and Legoland water Park.  They are also in the middle of constructing another massive theme park which they hope to open in 2019.  This hotel is good for families, there is a nice pool area and the location to the parks is very convenient.  If you stay at this hotel you get complimentary access to the parks.  There is an area (like City walk or Disney Springs) that is full of bars and restaurants which is within walking distance from the hotel.

We took the tour to the 124 floor, we were there quite early in the morning and the crowds were already starting to form.  I think for novelty value it is worth doing but once your up there the walk around outside isn’t very long but it does give you a good idea of the scale of the building in comparison to the other sky scrapers around it.

Codeine is illegal in Dubai so taking in the likes of Nurofen tablets is a big no-no.

Electronic cigarettes are also not permitted to be brought into the country – although from what we were told they can be used when inside the country.

Metro and tram are easy to use however there are separate carriages for women and men on most trains.  Tickets are very cheap.  The Metro does run from the airport into the city but given the sprawled-out nature of Dubai there might be a considerable walk in the heat with your luggage. I think I would still use the taxi transfer unless staying at the Sheraton Mall of the Emirates.